Suck it up, Princess: Disney's Princess Half Marathon 2012 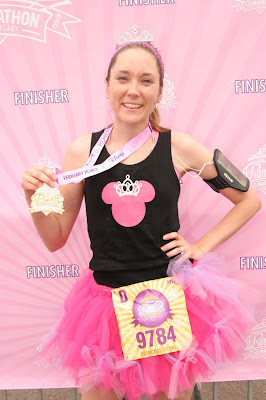 I titled this post after a fantastic tshirt I saw someone wearing during the Disney Princess Half Marathon. It was around Mile 6 or so, and I came upon her with those words printed on the back of her shirt: "Suck it up, Princess."

It was just the motivation I needed during that mid-race slump I felt myself falling into. So, I sucked it up and finished.


As far as races go, this one was my absolute favorite. It was only my second half-marathon (my first half being the Bermuda Day Half Marathon in Bermuda a few years ago), but I have trouble imagining I could ever love any race more. 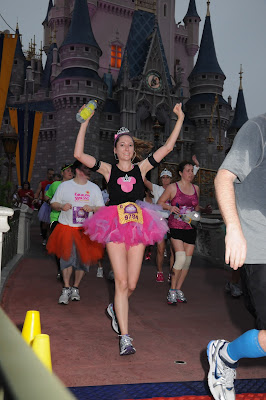 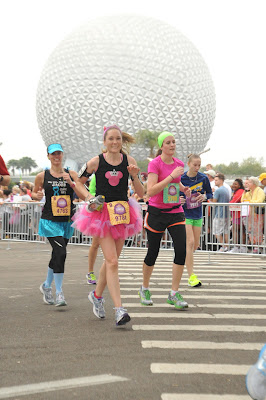 And when I finished, I got this: 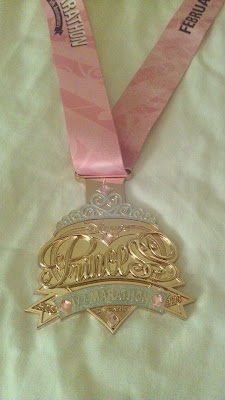 It was such fun. The race started in one of the Epcot parking lots. Then, the course ran from there to Magic Kingdom and back again. 13.1 miles of Disney magic. Along the way, they had great entertainment including music, the chEAR squad, and of course Disney characters. I almost forgot I was running so far.

The only complaint I have is due to the sheer magnitude of the race numbers. There were about 30,000 participants. Yes, 30,000. So that meant it was pretty much impossible for me to get even close to my comfortable pace until the 4th or 5th mile. It was CROWDED. I felt like I was trying to dart between slower runners for ages. So for that reason, there was no way I could count this race as a true time trial. I know I could've gotten a better time if I'd been able to run at my own pace the entire 13 miles.

Still, there's something nice about a low-key race like this. Because I knew I wasn't going to be able to run a personal best due to circumstances beyond my control, I felt more relaxed. I felt okay with admiring the Disney sights and sounds along the way. I was happy to just be... happy. I think everyone needs to run a race like that. I really and truly enjoyed the run, unlike many other races I've run in which I feel like I'm going to die or cry.

I finished the race happy. That was all I wanted.

I WILL run this race again!

Email ThisBlogThis!Share to TwitterShare to FacebookShare to Pinterest
Labels: half marathon, running